This year’s superhero is Liam “He-Man” Holland and is hands down the bravest baby we have ever had the pleasure of meeting. Diagnosed with neuroblastoma only hours after birth, Liam is an amazing little guy that is less than a year old! Liam is the son of Devin and Elizabeth Holland of Russellville. His sister, Madi, is four years old. His cancer affects his kidney and the surrounding area. Liam has undergone several rounds of chemo at Arkansas Children’s Hospital and was referred to the Children’s Hospital of Philadelphia (CHOP) for a surgery consult. On January 29, 2015 Liam was officially deemed cancer free after an operation was conducted to remove the tumor. Although the battle isn’t completely over, the outlook for Liam is spectacular! 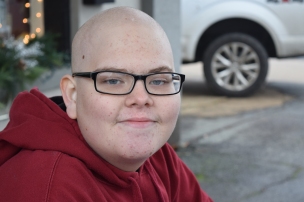